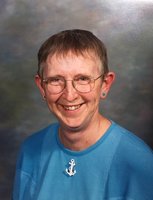 WOOD, Virginia 'Ginny' peacefully at Golden Dawn Nursing Home, Lion's Head on Sunday, December 6, 2020.  Ginny Wood of Lion's Head in her 78th year.  Born April 25, 1943 in North Bay, Ontario where she grew up and was educated, Ginny worked as a hospital lab technician in North Bay and Mississauga.  Predeceased by husband Bill Wood, parents Frances (nee Crich) and Earl Smith, brothers Everton Smith and Doug Smith and sister Joanne Robinson.  Remembered by cousin Bill White (Joy) and many more cousins, nieces and nephews in the Crich, Robinson, Smith and White families.  Lovingly remembered by Peggy Steele Fox and her daughters Carly and Makayla; dear friend Mary Morgan and many many more.  Bill and Ginny were married over 50 years and enjoyed many adventures on land and water including Canadian Coast Guard Auxiliary Search and Rescue.  Ginny will be greatly missed by the entire Lion's Head community.  She was a long time member and very involved in the Friendship Club and the Lion's Head United Church.  She loved many activities including square dancing, writing poetry, theater and acting in the Lion's Head community theater.  She especially loved her time on the water with Bill and exploring hidden anchorages in Georgian Bay.

The family would like to thank the staff at Golden Dawn and Dr. Shannon Vanderstelt for their exceptional care.

A private funeral service will be conducted at the Lion's Head United Church.  Rev. Ed Laksmanis officiating.  Friends are invited to watch a recording of the service which will be available on Ginny's page through the funeral home website after December 14th.  Arrangements entrusted to the GEORGE FUNERAL HOME, LION'S HEAD CHAPEL, Lion's Head.

Expressions of remembrance to Chapman House Residential Hospice or the Lion's Head United Church would be appreciated.  Mesages of condolence may be sent to the family through www.georgefuneralhome.com