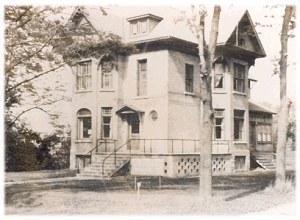 In 1958 Percy and Laverne George purchased the Hill residence at the corner of Mary and Brown Streets in Wiarton.  They renovated the main floor to be used as the George Funeral Home and resided upstairs with their son Tim and daughter Margaret Anne.  Tim eventually joined the business as a Licensed Director.  Over the years, there were three additions to the building to serve the needs of the residents of the Bruce Peninsula.  The business was expanded with the purchase of the Davidson Funeral Home in Lion's Head August of 1980.  Eventually the former grocery store on the Main Street of Lion's Head was purchased in 1982 and renovated to better serve the community.