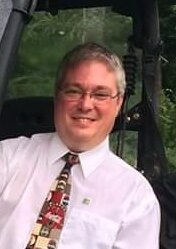 POWER, Stephan 'Steve' James - It is with extreme saddness that we announce the sudden passing of Stephan 'Steve' Power, at the age of 54 years, at the Wiarton Hospital.   Steve was born in Brampton, Ontario to Laureen and Eldon Power on August 3, 1967.  After spending time in British Columbia, Nova Scotia and New Brunswick, he settled with his kids in Georgian Bluffs and had a very successful career of over 30 years with the Toronto Dominion Bank.  A devoted father to Victoria Power (David) and Mitchell Power and was a proud and loving Grampa to Trey and Haylee.  He loved the outdoors, his guitars and music and had a genuine love for all animals.  Steve will be dearly missed by his parents Laureen and Eldon, brother Michael Power, sisters Barbara Clark (Steve) and Susanne McCarroll (Jim) and his nieces and nephew Shannon, Taylor and Christopher as well as several great nieces and nephews.

Private family arrangements entrusted to the GEORGE FUNERAL HOME, Wiarton.  Expressions of remembrance to the Grey Bruce Animal Shelter or Sick Kids Foundation would be appreciated.  Messages of condolence may be sent to the family through www.georgefuneralhome.com