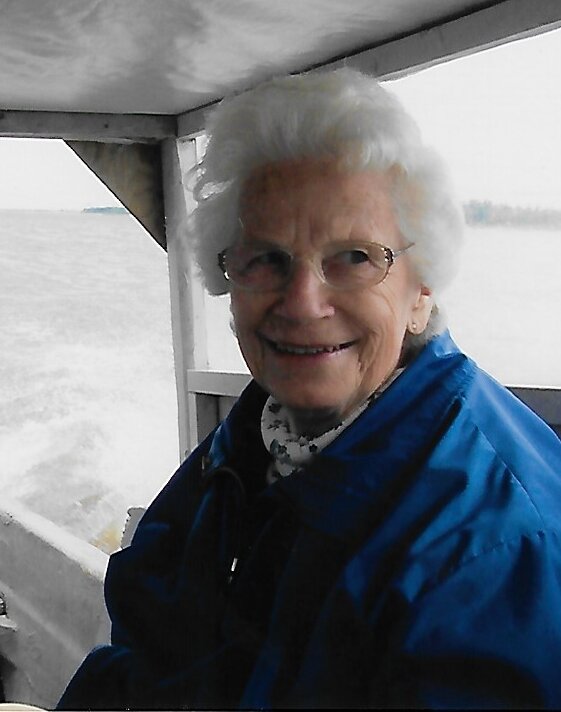 Cecilia Patricia Horner was born in Fleetwood, Lancashire, England on the ninth of February 1931. After completing her nursing training she and her friend Daisy answered an ad in a nursing magazine and they arrived in Seaforth, Ontario, Canada to take a short term position in the local Scott Memorial Hospital. That was the beginning of a life long career journey across Canada. Pat moved on to London, Ontario where she was instrumental in developing the first neo-natal baby ward in St. Joseph's Hospital. After a couple of other short term stopovers Pat moved to a remote location in the North West Territories. With limited facilities and personnel, Pat became everything from the Justice of the Peace to the local Coroner as well as providing most of the medical care. She met George Horner another multi-tasking member of the community and eventually they were married in Lion's Head in 1975. Pat and George retired to Lion's Head and Pat soon became involved in choirs, writing clubs and numerous volunteer activities earning her a well deserved Volunteer of the Year Award. One of her greatest legacies might have been as a founding member of the Bruce Peninsula Hospice Foundation. Members of that group were by her side over her final few days.

The funeral service will be conducted at Christ Church Anglican, Lion's Head on Saturday, October 8, 2022 at 11:00 a.m.  Interment Eastnor Cemetery.  Arrangements entrusted to the GEORGE FUNERAL HOME, LION'S HEAD CHAPEL, Lion's Head.  Expressions of remembrance to the Alzheimer Society, Bruce Peninulsa Hospice or Christ Church Anglican would be appreciated.  Messages of condolence may be sent  through www.georgefuneralhome.com